The Golf Wars tells the progressively wild story of the dueling pianists, performers at a familiar East Village music venue, who test the durability of their act by taking it to Oahu Hawaii! There, amidst their self-promoting, they develop involvement with pivotal figures in a conflict between US military, which occupies 50% of the island, and a foreign owned golf resort. 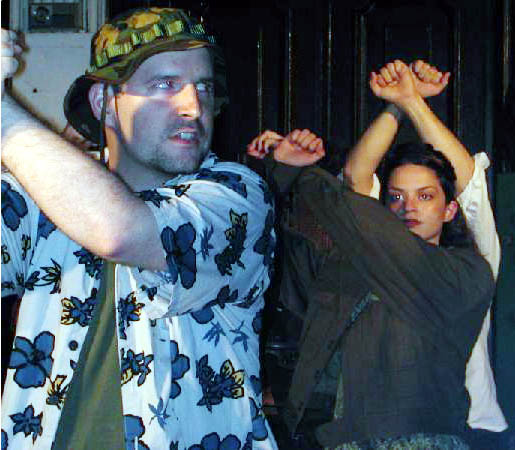 "Peter Dizozza's musical comedy, "The Golf Wars," featuring live performances by a sterling cast of "Songs of The Golf Wars," prod. by MMMUSA, had its first staging at The Williamsburg Art and Historical Center in Brooklyn. Directed by Tom Nondorf. Starring Josh Mertz & Freeman Borden as The Dueling Pianists, Jeffrey LaMar as Jack Aashimoto, Nora Naomi Simpson as Thankful Widgeons, Robert Kiernan as Inspector, Tom Warnick as Harold Aashimoto, and Lennie Varvarides as Princess Becca. The premiere performance was September 20, 2002 with Tom Nondorf in the role of Harold Aashimoto.  Opening night was a success and we even had custom tee shirts for sale.

This production was mounted as part of The WAH Centerâ UNITY CANVAS WORLD PEACE multi-media art exhibit, which ran concurrent with the performances.

1. Introduced by Peter Dizozza at Lou Rodgers Square One on Election Day, November 6, 2001.

one answer to the rhetorical question: Why write a musical comedy called "The Golf Wars"