The Augusteia is a lush harmonic opera about a brother and sister, Augee and Lisa, who, losing their parents in a fire, must fend for themselves.  Composition began in 1976.  Act One, only, was completed as of 1980.

The Sentiments of Lisa ("Kin's Dead")

The Sentiments of Augee (Atmospheric Stillness.  "Someday When The Clouds...")

A Visit to Town, in which Lisa spends a goodly portion of the day "securing a job"

Dance of the Dolls/Lisa and The Cobbler.

Best of Intentions (Lisa has them for Augee)/Interlude

Flashback, The Eve of September, or "Matthew's Passion" (older brother, Matthew, advises them to leave before he burns down their home.)

Augee falls on Mrs. Crawdles, something from out of her scurries up the stairs.

Settle the Deal (Almost Even)

Lisa Down.  Lisa Up and Out.  Lisa Victimized and Victorious

Lisa's writing in the sky:  "Don't be Bully by your Bowltice, Bully Your Bowl in Wildstead Westcrew"

see below for a page illustration from the piano score. 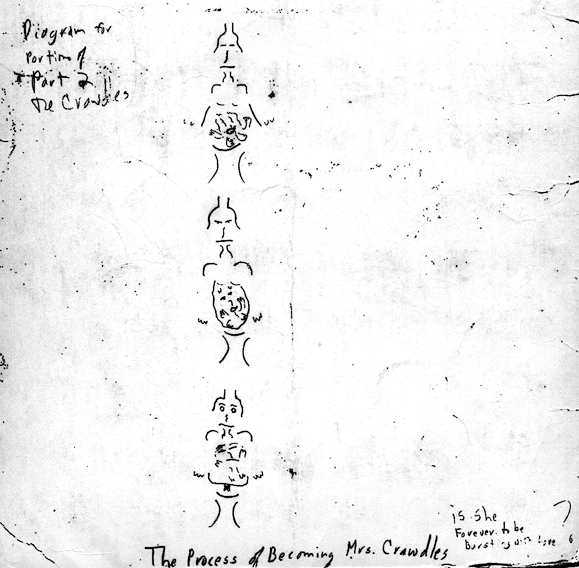 In Act two Augee and Lisa live with their next door neighbor, a Mrs. Crawdles..

This is the story of two people trying to grow up, pretending to grow up, and finally forgetting about growing up.   Events have to filter into these two for them to acknowledge that such things have occurred, hence they produce dramatics out of such events.  With clear heads they work toward hampering possibilities of freedom from their surroundings; consequently they wind up suppressed.

As they are not a team their forces which, were they together, would rapidly surge, are instead ineffectual bubbles that keep an eye out for each other.  They relate well to each other; connected together they produce pleasing and balanced geometry, but they are nothing compared to say Neptune or Pluto.

When the crisis occurs and they are almost even things start getting like we're nearing absolute zero.

One has always avoided being like the other in action and appearance.  Each has tried to dominate the other both mentally and officially (via appearance or by the way it looks).

The parallel as I see it today is the opposing drives of my mother and father, that they united were a force, but they were never united, and why not, I wonder?  Stubborness?   Some illusion of self that they refused to lose?

I'm sorry now to think of the Augusteia story

Please I must acknowledge furthermore that the depicted relationship is one of brother and sister.