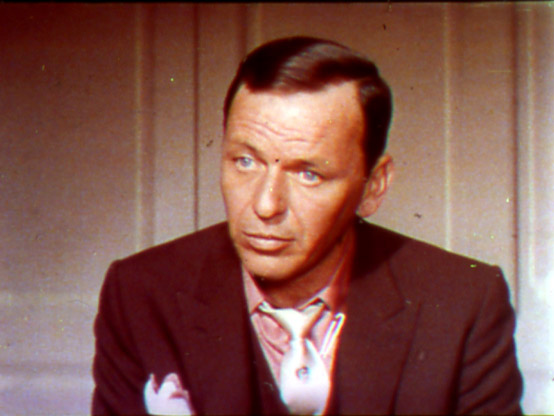 "You keep saying you got something for me, something you call love but confess..." Lee Hazelwood.

Both Frank and Tony Bennett began with these almost generically pleasant voices. Tony Bennett doesn't strike me as psychotically maintaining his career. His smoking just created his now unmistakable voice, and his general pleasantness shines through. I think the velvet fog describes the also pleasant Mel Torme voice (I like his recording of "Again"). Apparently, Frank hurt his voice singing and he needed to turn to acting, after appearing to great hilarity in MGM musical films. I saw some parts of some of them. Maybe, amazingly, he started in a classic, On the Town with songs mostly by Leonard Bernstein and Comden and Green ("New York New York a helluva wonderful town not to be confused with "Wonderful Town," by Bernstein, Comden and Green with, currently, Donna Murphy, live, which is probably very wonderful indeed.)

The mgm film of Jerome Kern songs, Til The Clouds Roll By, features his rendition of "Old Man River." So funny... "lands in jaillllll --- no breath --- I gets weary ...." that is a funny event.

stupider was anchors aweigh, the one with gene kelly dancing with one of those terrytoons.

So without a heartthrob voice, frank needed a film career without singing and the getting of the role is the robert evans godfather movie horror scene of the producer with the horse's head. (Another italian descent singer plays the frank role in the film. They say he knocked up who, Ava Gardner?)

The book, From Here to Eternity, was followed by a book about an author who had just written a big hit novel, From Here to Eternity, and was trying to write another. It's called SOME CAME RUNNING, and its film has a wild Shirley MacLane cameo, and Dean Martin as the sidekick to the author, portrayed by the actor who was formerly the skinny obnoxious victim killed by marty Borgnine in the prior acadamy award winner of the downtrodden bored militia stationed at pearl harbor. It's like Norman Mailer following Naked and Dead with Deer Park... the film is the return of debonair Sinatra (directed by Vincent Minelli). James Jones wrote those books..

Frank pulled Manchurian Candidate after Kennedy's murder, yet he actually played the oswald role in Suddenly.

He slowed down songs while increasing the speed of the beat beneath them.

Finally, at that low point in his treasured career when Nelson Riddle's orchestra announced his new voice like a sunrise and he declaims, "I've got the world on a string, sitting on a rainbow," the only good thing, the one reason to lift him (and us) out of the depths of despair is that song.

As for that once ubiquitous song of songs, New York New York, remember: Frank Sinatra is a singer who chose to highlight the most important of ampersands... Aaaaaaaaaannnnnnd. posted by Peter Dizozza 1:40 PM

My other recent dose of entertainer entertainment was through meeting Spats Donovan, Hooch Houlihan, Dennis, I don’t know his exact name, but he is a spot-on impressionist with a singing voice to match. I played piano for his “Let’s Be Frank” at the 13th Street Repertory Theatre. I subbed for Aya Misoshoru, his amazing pianist, arranger, music director. Patrick Jude did a dead-on older Frank Sinatra impression, Jim Davidson was Dean Martin, everyone is great. They re-enact scenes from Robin and the Seven Hoods.

Regarding Some Came Running...

Mr. Jones! what a great subject opener... Thank you Justin, thank you Dashan...hic...

so a strong-arm godfather got the skinny guy the skinny guy part in the somebody-launch-an-air-strike-on-this-ship-o'-fools story (sorry)... from here to eternity, yes?

launching the song and dance crooner into searing black and white drama...

(was Ava Gardner the real Godfather?).

based upon the searing bestseller by James Jones...

Frank reincarnates as the author of his own acadamy award character's script, James Jones, in Some Came Running...

Please note: The bar scene with Shirley MacLaine is transcendent... a riot... Yes, it is a personal favorite...

James Jones' From Here to Eternity Goes to Hollywood sequel: Some Came Running

Norman Mailer's Naked and the Dead Goes to Hollywood Sequel is